Family films to see at the cinema

Fancy a trip to the cinema, but don’t know what would be fun with the kids? Here’s our up-to-date guide of family films, written by Mike Davies especially with families and kids in mind. Everything from small scale films to great blockbusters for all the family PLUS trailers for upcoming films! Please note that not all 12A films are appropriate for younger children. Let’s Go With The Children offers a guide to what’s suitable for family viewing. 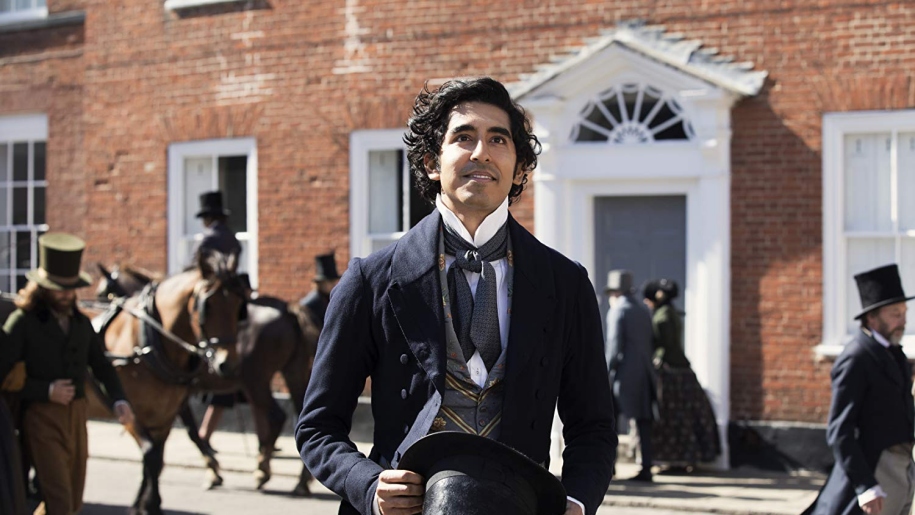 After the BBC’s sweary adaptation of A Christmas Carol, director Armando Iannucci’s take on Dickens’ sprawling class-themed classic comes as a true joy. While not entirely faithful to the original in its narrative, even in its darker moments, it’s close enough not to quibble over the fate of assorted characters.

The story is framed by David presenting his life story in a  theatre, often appearing as an adult observing flashbacks to his childhood. Following his journey to find where he fits in and becoming a nascent author along the way, the film’s populated with larger than life characters, from his cruel stepfather Murdstone, Steerforth, the student friend who betrays his trust, and the obsequious Uriah Heep (Ben Wishaw) to such eccentrics as the kindly houseboat-dwelling Houskeeper Peggotty and her husband (Paul Whitehuse), the forever debt-ridden Mr Micawber (Peter Capaldi), temperamental donkey-hating aunt benefactor Betsey Trotwood (Tilda Swinton), her sightly deranged cousin Mr Dick (Hugh Laurie) and Dora (Morfydd Clark, who also plays David’s mother) as the bubble-brained daughter of his employer with whom he falls in love.

Sprightly delivered with a delightful sense of whimsy and many laugh-out-loud moments, with David variously referred to as Trotwood Copperfield, Daisy and Doady by different characters, this is an absolute joy. 119 mins

LGWTC Guidance: A Dickens of a good time 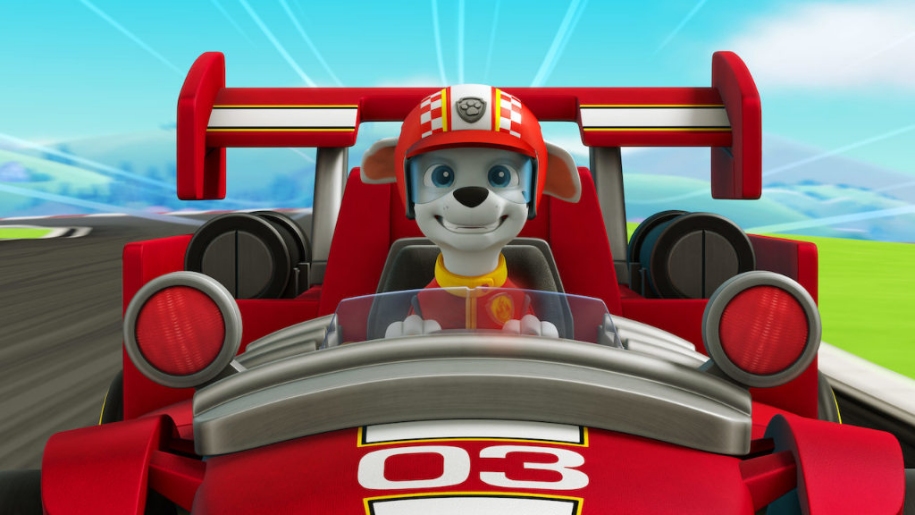 A feature length episode from the pre-school animated TV series about a group of rescue dogs. Here they’ve built a race track,  but, when legendary human racer The Whoosh sprains his arm and is unable to drive in the championship race, he asks his biggest fan, Marshall, the fire-dog, to take his place. Now, Marshall has to overcome his lack of confidence and his dastardly rival the Cheetah (and, yes, she does)  to become the world’s fastest race-pup. Meanwhile, the Cheetah and her uncle Cheetah are stealing the other drivers’ cars. The animation is basic at best, but it’s cheerful, colourful and fast-paced enough to keep the under-sevens amused. 66 mins

LGWTC Guidance: Strictly for young fans of the TV series 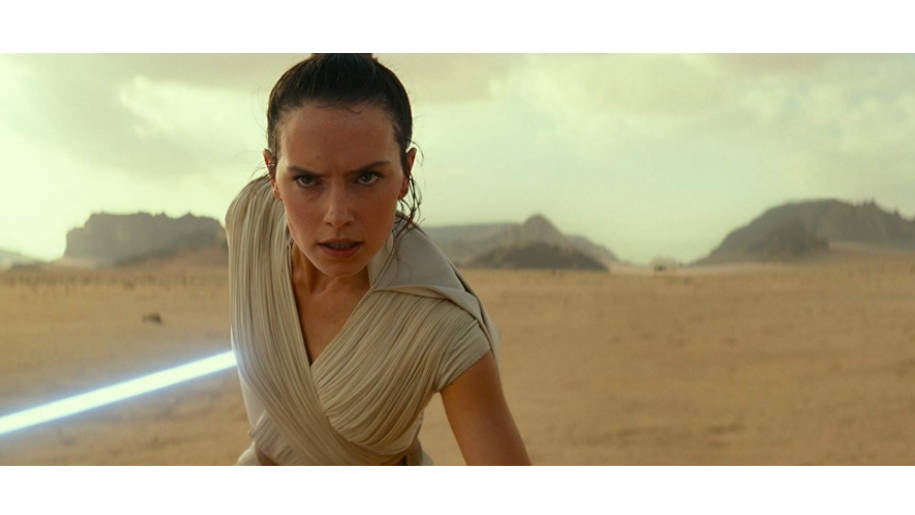 Star Wars: The Rise of Skywalker (12A)

Forty-two years after the saga began, JJ Abrams finally brings it to a finale that is both exhilarating and, at times, nigh incoherent in a sprawling narrative basically themed around questions of identity. Luke having been absorbed into the force in The Last Jedi, Rey (Daisy Ridley) is still doing her Jedi training while First Order commander Kylo Ren (Adam Driver) has forged a new alliance with the Emperor Palpatine (Ian McDiarmid) who, despite being killed off in Episode III, is back and planning to launch the Final Order, he just needs Ren to dispose of Rey. The overly busy plot races from one episode to the next and, while it looks visually stunning and the action sequences are thrilling, it’s not until the final stretch that the narrative coheres with some sort of clear purpose as they search for a crystal that will lead them to Exogol, the hidden land of the Siths, and attempt to translate a vital clue inscribed on a dagger which C-3PO is programmed not to translate.
Along the way, there’s a couple of other cameos from hitherto deceased characters, along with the return of Lando Calrissian (Billy Dee Williams) for the first time since Return of the Jedi, not to mention voice cameos from the likes of Yoda, Obi Wan Kenobi and Darth Vader while the late Carrie Fisher appears as Leia courtesy of some clever archive footage. And, in keeping with past revelations about family blood, lines there’s another biggie of Luke/Vader proportions thrown in here too with flashbacks to the fate of Rey’s parents. Redemption, sacrifice, embracing/becoming one with the Force and a variety of character twists all pile up while also finding room to throw in new characters such as Richard E. Grant’ First Order general and Jannah (Naomi Ackie) as another First Order conscript who refused to carry out a massacre, alongside the return of Poe (Oscar Isaac), Chewbacca, C-3P0 (Anthony Daniels) and Finn (John Boyega).
The set pieces are awesome, most notably the final battle between the Resistance and the Empire’s fleet and a light sabre duel between Rey and Ren atop the remnants of a corroded hulk surrounded by towering waves while the last scenes between them and the coda manage to elicit an emotion that always eluded George Lucas, the final two words likely to have those who’ve taken the same journey erupt into floods of tears. 141 mins
LGWTC guidance: Going out on a Sky(walker) high 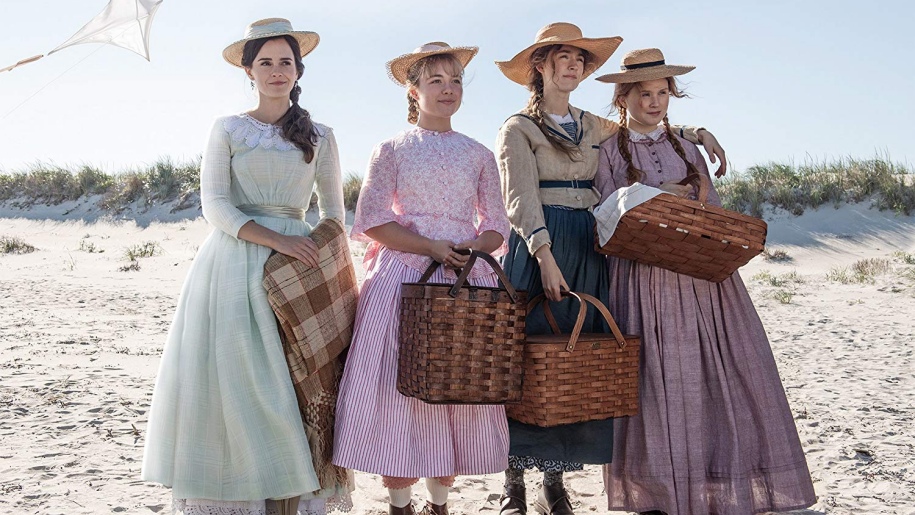 Louis May Allcott’s evergreen 19th century novel gets another rework at the hands of director Greta Gerwig. Set during and after the American Civil War, it tells of the four March sisters, the eldest, family beauty Meg (Emma Watson), independent-willed aspiring writer Jo (Saoirse Ronan), petulant Amy (Florence Pugh) and piano-playing Beth (Eliza Scanlen, as they search to find their identities. Here, Jo is already tutoring in New Work and working on becoming an author, Amy is in Paris studying painting and acting as companion to her aunt (Meryl Streep), Meg is married to impoverished schoolteacher John Brooke (James Norton), and Beth, the youngest, well, she’s the sickly tragic one. Laura Dern is their mother trying to cope in reduced circumstances with her husband away at war and Timothy Chalamet is childhood friend Laurie who, having fled to Europe heartbroken after Jo rejected his proposal, may well still be a flame in Amy’s heart., except, of course, she’s resentful of being second best to Jo.
It’s all a bit overly busy early on and the constant switching between past and present can prove confusing, but it eventually settles down, it looks terrific, the performances are excellent with Ronin especially brilliant, and giving it a contemporary feminist spin while staying true to the book’s knowingly compromise of a happy ending, this is destined to become a modern classic. 134 mins

LGWTC Guidance: Sisters are doing it for themselves 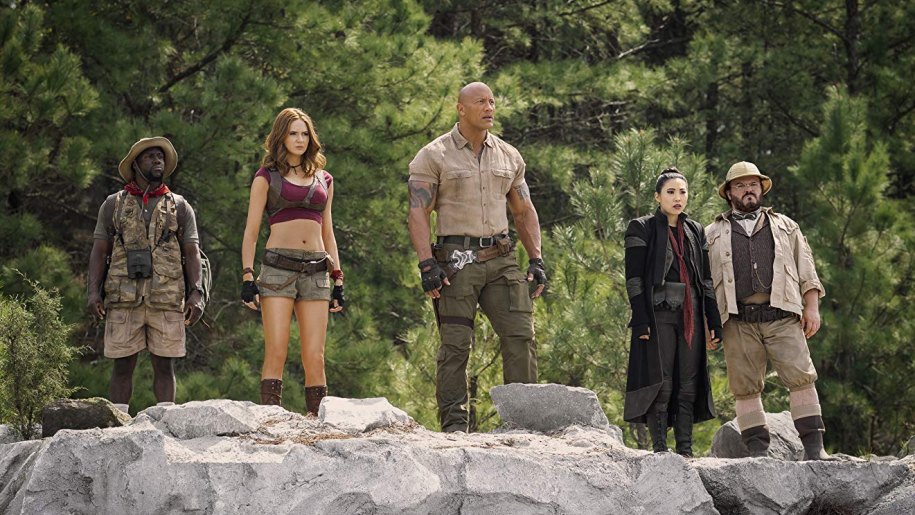 The gang’s all back when they get together to celebrate Bethany’s return from her study abroad. However, Spencer never shows.  It is set sometime after the last film. Going to his uncle’s house, they discover he’s gone back into Jumanji and decide to follow and rescue him.

Greeted as before by game host Nigel (Rhys Darby, they learn that this time they have to save Jumanji from Jurgen the Brutal (Rory McGann), a warlord who killed Bravestone’s parents and has stolen a precious stone and unless it is again exposed to the sun, Jumanji and its people are doomed.

In many ways, this serves up much the same as before.

Again directed by Jake Kasden, it romps along through a series of set pieces, including a floating rope bridge encounter with a horde of angry mandrills and a desert chase pursued by a flock of ostriches before they arrive at Jurgen’s fortress, all down to their last life, during which further amusing avatar swaps occur (notably between Ruby and Sheldon), including the introduction of lockpicking Ming (Awkafeena), a whole new character,  and Bethany finally puts in a very unexpected appearance along with Alex (Colin Hanks), the man they rescued last time round.

The film takes a while to find its feet, but once in the swing it romps along in hugely entertaining fashion. Make sure you hang around for when, having all declared they’ll never go back, a mid-credits scene suggests that, for the next sequel, they won’t have to. 123 mins 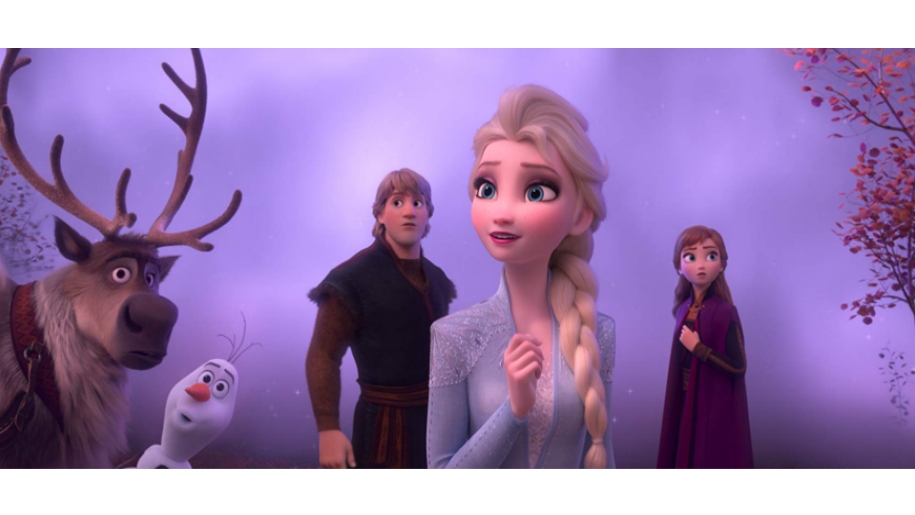 Let’s say this from the start, neither the film nor the songs are a patch on the original. Show Yourself seems destined to be favourite, but it’s no Let it Go. Set three years on, Elsa (Idina Menzel) now rules Arendell, goofy snowman Olaf (Josh Gad) is all permafrost and Kristoff is trying to summon up the courage to propose to Anna (Kristen Bell). Not that you need reminding, but Elsa’s the one with the magic ice powers. But why her? That’s the engine that drives the narrative, the film opening with a childhood flashback as their parents, King Agnarr (Alfred Molina) and Queen Iduna (Evan Rachel Wood), tell them a bedtime story about an enchanted forest to the north, ruled by the spirits of earth, air, fire and water and how, 34 years earlier, their grandfather sought to forge a pact with the indigenous Northuldra only for hostilities to inexplicably break out leading the forest and all within to be imprisoned by a wall of mist, but not before the young Agnarr was rescued by a girl from the tribe.
Now, the grown Elsa is hearing a voice calling her, so she determines to set off, as the song puts it, Into The Unknown, accompanied by Anna, Olaf, Kristoff and Sven the reindeer. The revelations, however, are unlikely to come as much of a surprise to any alert six year old, while learning the truth of what happened, albeit featuring a cute flaming salamander and a water horse, is something of a plodding affair, punctuated by a running gag about Kristoff’s failed attempts to propose.
The first film’s theme of finding yourself gets reheated, this time in the context of growing up and change, but it’s not until the final act that the thing really catches fire. The animation is, of course, first rate, the characters remain likeable and the mix of humour, sentiment and action is about right, but, when, at the end, someone asks Elsa if they’re going to lead them into any more dangers, you kind of hope Disney means it when she says no. 103 mins

LGWTC Guidance: It’s been cool, but the thaw is setting in.

Not all 12A films are appropriate for younger children. Let’s Go With The Children offers a guide to what’s suitable for family viewing. 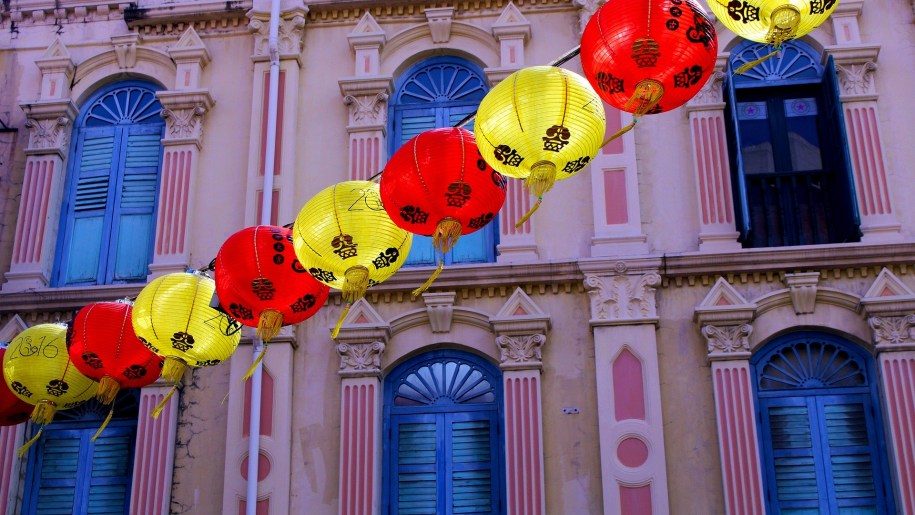 Discover a host of family events centred around Chinese New Year and Join in on the celebrations! 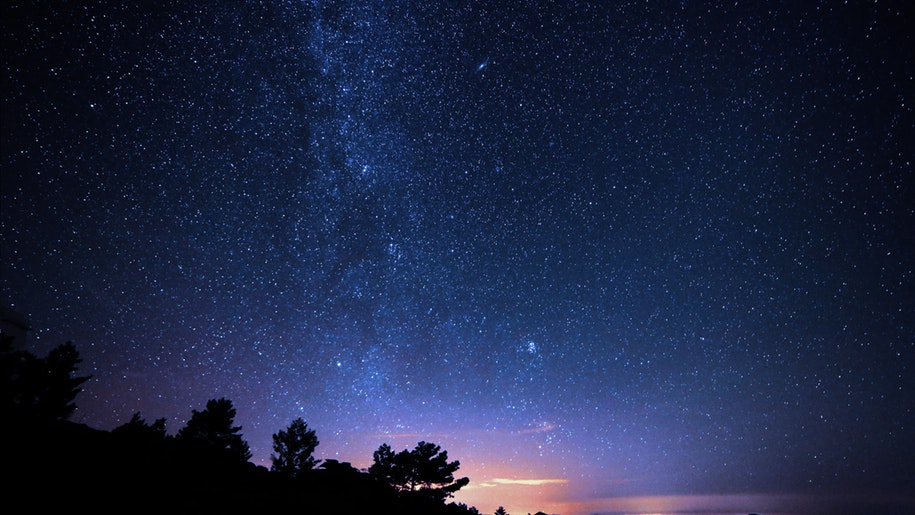 Stargazing With The Family

During the start of the year make the most of long dark evenings, grab some binoculars and get outside with the kids to look at the stars. Discover Stargazing events near you this Winter.

Take Your Kids To Soft Play

6 top tips for taking your toddler to a soft play centre this new year. 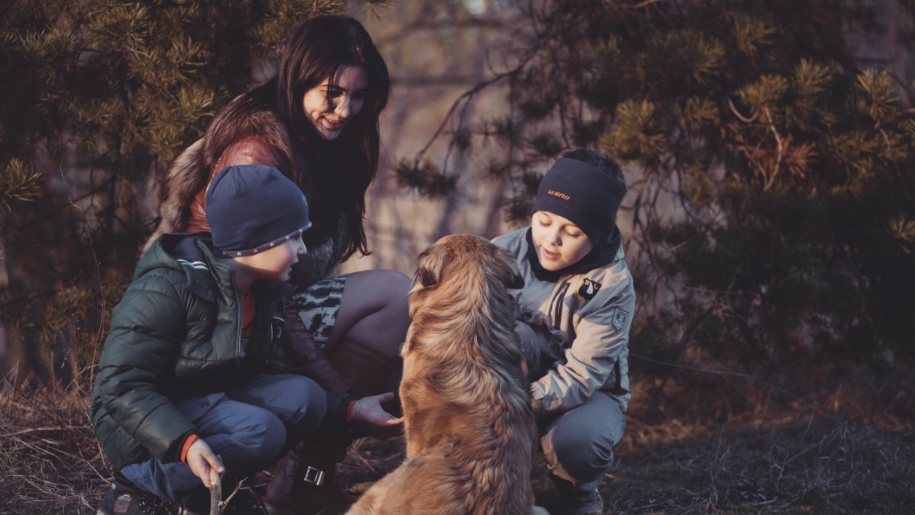 Discover a host of family activities and events to take part in this January. As the lull after Christmas sets in, find something to entertain all the family from exhibitions to the great outdoors. 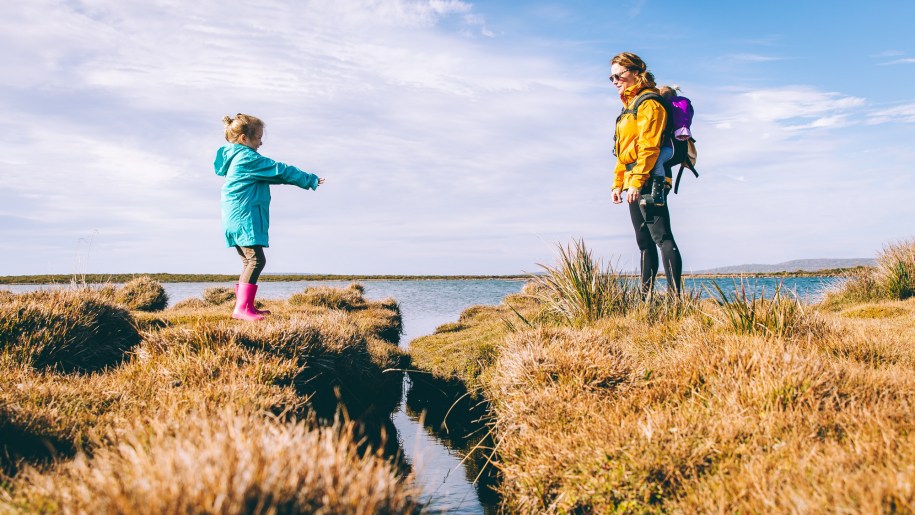 A carefully curated a list of the top attractions to visit in 2020, located in different areas of the UK and an extra special mention to some upcoming 2020 events, which are not to be missed!

Check out our up-to-date guide to family films in cinemas nationwide which are suitable for the whole family. Everything... More

A selection of great ideas and inspiration for family holidays across the UK to suit all budgets. More

If you're out and about over the school holidays or on a weekend, here's our pick of child-friendly restaurants. More

Here at Let’s Go with the Children we have pulled together a list of some of our favourite birthday party venues acros... More